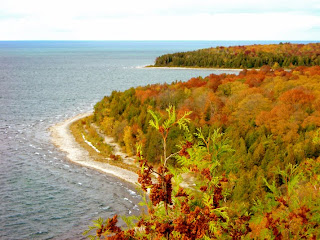 Up north, in Wisconsin, is anywhere north of Madison. Reason being, that’s where the land starts to open up and become more country. There are more bait shops than McDonalds and more bars than churches—it’s the north woods, i.e. a hunter kind-of-a-thing.

Well it’s that great northern land that we are heading into, Door County to be precise. If you look at the state of Wisconsin you will see it resembles a glove, maybe even a baseball glove—not a mitten like Michigan. Nonetheless, the area that looks like the thumb is Door County, which runs from Green Bay in the south to Washington Island in the north, with lake Michigan on its east and west. Between these points are scads of small (pop 200-300) little picturesque towns, cherry and apple orchards, wineries, and gift stores. This area has been rightly called “the Cape Cod of the Midwest.” For my money, it’s better; less crowded, and with no chain stores or restaurants of any kind, mostly family owned and very cozy. Read More>>>
Posted by Unknown at 12:47 PM